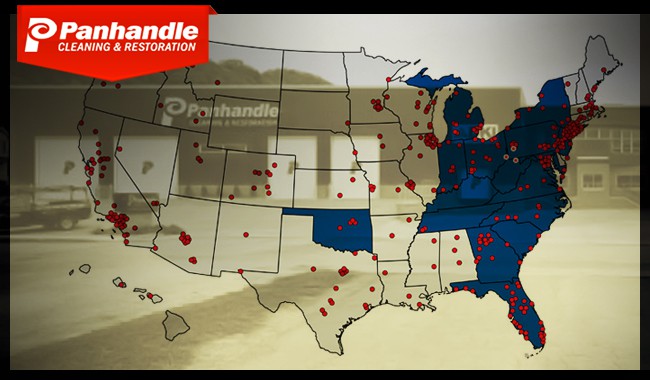 As far as Bob Contraguerro is concerned, restoring businesses and homes damaged by fire, flooding, sewage backups and the like has turned into a science. Unlike the old days when the focus was on simple demolition, nowadays the emphasis is salvaging structures, equipment, and materials as much as possible and doing it in a timely manner.

Contraguerro, vice president of Wheeling-based Panhandle Cleaning and Restoration, said his mission, be it for home or business, is to restore a sense of normalcy as quickly as possible. “Our main goal is to reduce damage by our quick response, to respond as quickly as possible,” he said. “Because the faster we’re able to get in, the faster we can get people back in — whether it’s getting people back in their homes or back in their business.”

And time is money, particularly when it comes to his business clients. He said extended downtime means people are out of work, customers can’t get the products they need and projects in progress can be lost forever. “One small disaster in one business can affect many people in many parts of a company,” he said. “And every day a business is down they lose customers, and they don’t always come back — 47 percent of businesses that sustain vital damage to vital business records or operations never reopen, and 27 percent of those businesses will close within two years. Through technology, training, and equipment, we’ve perfected the art of getting people back in as quickly as we can.”

Panhandle Cleaning & Restoration was founded as a cleaning company in 1977 by Contraguerro’s father, Robert Sr. It didn’t take long for him to branch out, recognizing the growing market for a business that could handle both the structural and cleaning aspects of post-disaster restorations. The company typically does 800 to 1,000 commercial and residential restorations each year throughout West Virginia. Its crews use the latest high-tech equipment and restoration techniques, including a new thermal imaging camera, a trailer-mounted desiccant dehumidifier, and a dry ice blaster.

Contraguerro said thermal imaging allows Panhandle’s crews to find water sources more quickly and less expensively than conventional techniques, eliminating the need to demolish portions of walls just to find water sources, reducing repair times as well as the project expense. The camera also allows technicians to inspect roofs and other hard-to-reach areas from the ground. The trailer-mounted desiccant dehumidifier dries large commercial structures efficiently and quickly enough to inhibit mold and secondary problems associated with moisture. It also can be used to certify newly built structures as dry, enabling owners to realize up to a 15 percent reduction in insurance rates, and allows Panhandle’s technicians to dry save, and reuse more materials from water-damaged structures than they could with conventional drying techniques. Because they don’t have to demolish and replace elements that otherwise could have been salvaged, he said, customers enjoy both savings in materials and faster re-occupancy of their homes or businesses.

And the company’s new dry ice blaster cleans contaminants such as soot and mold from wood, brick, stone, metal and other surfaces, restoring the wood framing in churches and Victorian homes and buildings. He said it saves time and money because it is faster and reaches areas that conventional sanding can’t. He said dry ice simply evaporates and doesn’t leave messy residues behind. Because the process is water-free, electrical equipment cleaned with the dry ice blaster doesn’t require drying time.

Contraguerro said the new equipment already has proven itself: His crews were able to pinpoint and fix the source of a recurring leak in a local school within five minutes using the thermal imaging camera, whereas three other inspectors had spent considerably more time at the site “and were unable to even find the problem.” Likewise, the dehumidifier helped his crews dry out 23 hotel rooms “in a matter of just days” that otherwise would have been unusable for an entire month. He said his crews undergo extensive training to make sure they know how to use the equipment. For instance, he brought a certified trainer in from Boston just to train eight of his technicians in the proper use of the dry ice blaster.

While owning the equipment outright is a major expense, he said the alternative – renting from companies that, for the most part, would not be local – would entail delays in serving clients. “Within five hours, we can be anywhere in the state of West Virginia with our equipment and be working,” he said. “And some places in West Virginia are a four-and-a-half hour drive from here.”

Panhandle Cleaning & Restoration, he said, “creates unique solutions to everybody else’s problems.” “There are so many things that can affect (buildings), and you don’t think about it until it happens,” he said. “But this industry has evolved. That’s what has allowed us to evolve as a company. It’s really gone from a rip-and-tear type industry to a science, an art, where you have to be trained. And what we’ve brought to the state is that we’re one of the top 350 restoration firms in the country. We’re highly trained. We have a certified restoring staff – we’re one of 500 certified restorers worldwide, and we’re one of one of six certified mold professionals nationwide. Having that knowledge in our company allows us to stay on the cutting edge.”

Founder Robert Contraguerro Sr. now serves as president of the company, focusing on the production side of the business. Robert Jr. oversees the technical aspects and his mother, Jody, handles accounts receivable.

This article was originally published in The State Journal.