MORRISTOWN – Mold growing inside Union Local Elementary School has been removed – but more work is ahead to prevent it from coming back. 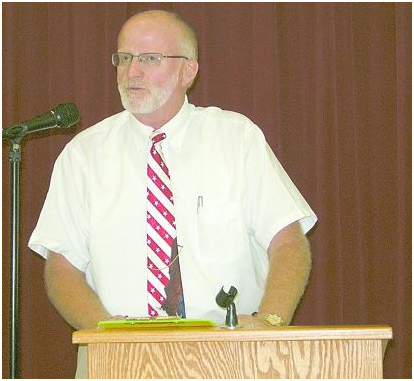 Photo by Casey Junkins
Union Local Schools Superintendent Kirk Glasgow speaks about the condition of the elementary school during a Wednesday school board meeting.

During a school board meeting in the school cafeteria Wednesday, Superintendent Kirk Glasgow said rooms in each wing of the school were inspected for the presence of spores after several staff members had complained of suspicious smells and spots throughout the school.

Eric Matyskiela of CMG Architects & Engineers Inc. in Wheeling, said the wall outside the school’s music room was not built to specifications – which allowed water to infiltrate the school to accelerate spore growth. Since the school opened in 1998, it has been evacuated several times due to unspecified environmental problems.

The elementary school inspections were performed by John Gongola of SDI Environmental Consulting on July 2. Fungi detected in the school included Aspergillus/ Penicillium, Ascospores, Alternaria, Basidiospores and Cladosporium, but Gongola said the amounts were not enough to cause illness.

“Most of the school had relatively low numbers of spores, which means it is safe because you are always going to have some of these spores in a building. But we did find a problem in room A-19, the music room,” he said.

Gongola said the problem was caught relatively quickly before getting worse, but did not know how long the spores were in the music room.

“Mold spores are not a problem; mold is usually a symptom of water intrusion, which can lead to other problems,” he said, noting that water has been leaking in through the outside wall.

Gongola said the spores were feeding off the drywall in the music room, so Robert Contraguerro Jr. of Panhandle Cleaning and Restoration was hired to remove the drywall.

“We have removed the drywall in that room, and cleaned the entire room down. It was a pretty simple project,” he said.

Glasgow noted he does not know how much the work will cost the district because he has “not received a bill yet.”

“The school board has told me that cost is not an issue. We must resolve these problems before they get worse,” he said.

Matyskiela said the original plans for the music room’s outside wall called for an 8-inch block wall with a 1-inch air space beside it and another 4-inch wall alongside. But as constructed, the wall is only 8 inches of block.

“If the second wall was there, most of that water would have been kept out of the building,” he said.

While Contraguerro removed the drywall from the music room, Matyskiela believes much more work needs to be done to prevent mold at the school.

His recommendations for the school include: pressure wash and clean all exterior existing masonry surfaces to remove dirt from pores and to remove staining; apply sealant to all exterior masonry surfaces and require a 10-year warranty; remove existing caulking and backer-rod from all control joints; install new backer-rod and sealant at all control joints and require a 20-year warranty for this work; install sealant “fillet” on top of the accent bands which are currently trapping water; and remove and replace all sealant at all exterior window locations.

Matyskiela said a cost for the services is still being negotiated with the district. Glasgow noted that all work will be done in time for the start of school in late August, while noting the cost is still under consideration.

Meanwhile, Tracy Thompson of the Ohio Bureau of Workers’ Compensation said he was pleased with the work the district was doing.

“Everything here is being handled properly and professionally,” he said.