JumboTron Is the Next Piece of the Puzzle

Almost five years after a complete overhaul of the facility, officials for Wheeling Island Stadium and Ohio County Schools have added another touch in their attempt to make the stadium the best in the state.

Just in time for Sunday’s Rudy Mumley OVAC All-Star Charity Football Classic, officials announced the installation of a 12×16 foot video display board in the south end zone above the existing scoreboard. According to Bernie Dolan, principal at Wheeling Park, the decision to install the board was an easy one.

”We’ve seen how it has enhanced the game and the fan excitement (at other stadiums), so we thought it would be a great addition,” he said, adding that similar boards at John Marshall and Steubenville served as a guide for the project.

The board, which is manufactured by South Dakota-based Daktronics, will cost around $200,000, all of which will be paid for during the course of the next five years by a host of corporate sponsors. These sponsors, which include primary sponsor Wheeling Hospital, Panhandle Cleaning and Restoration, WTOV-TV, Wheeling Island Gaming Center, Ohio County Commissioners and Walters Construction, will have signs displayed around the scoreboard. They will also be able to run commercials on the board during breaks in game action, Dolan said.

Construction on the board began earlier this month, with the board itself arriving about two weeks ago. As of Wednesday morning’s official announcement, the board had not been placed on the new steel pillars, but Dolan says he is not worried about the board’s status for Sunday’s game.

”Everyone has been working hard in getting things together since the board came in two weeks ago,” he said. ”We expect it to be up and running by Sunday.”

The board will be used for all events that take place at the stadium. This will include home football games for both Wheeling Park and Wheeling Central, as well as the OVAC Cup Soccer tournament, the OVAC All-Star game and the West Virginia Super Six Football Championships. Dolan, who is also a member of the Super Six committee, believes the addition of the board will serve as a major selling point to keep the games in Wheeling and will show how committed those involved are to keeping them here for many years to come. 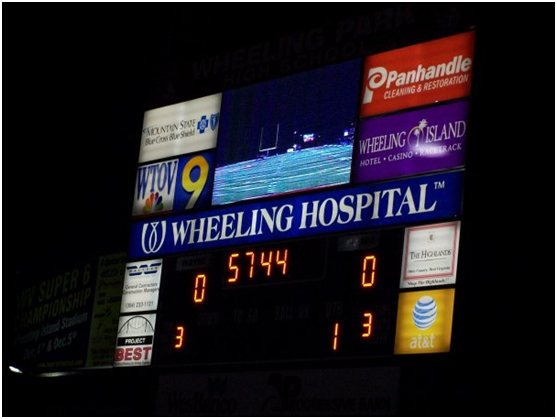