Skip to content
Previous Next
How Not to Thaw Frozen Pipes: A Cautionary Tale 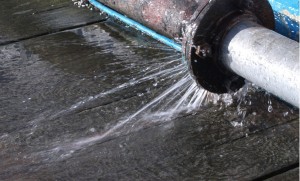 How Not to Thaw Frozen Pipes: A Cautionary Tale

A recent story in the local Pittsburgh news recounts a man burning his house down after attempting to thaw frozen pipes in the basement with a heater and hair dryer. The man allegedly fell asleep after rigging this system and awoke to popping sounds, eventually leading to a fire. The recent arctic weather across the northeast and midwest U.S has taken a toll on homes and businesses. Frozen pipes are always a concern during the winter, but the negative double digit temperatures are creating a much larger problem in many areas as people struggle to keep themselves warm and adequately protect their homes. The polar vortex that has descended on much of the U.S has created desperate conditions and some desperate responses. Incidents like these are unfortunately quite common during the winter, especially during such severe cold.

During negative double digit temperatures, everything is adversely affected. At home, frozen pipes are not just common, but practically inevitable. The only thing you can really do is try and keep them from bursting by ensuring your home remains warm, you regularly run the faucets, and pipes along exterior walls are well insulated. You should never attempt to manually thaw pipes by leaving heaters or other heat sources running near pipes. As the above story illustrates, the risk of fire is very real, especially when you forget about the heat source.

On the scale of inconveniences and risks to your home, burst pipes rank considerably lower than a house fire. Do what you can to prevent pipes from freezing but stop short of risking your home to thaw frozen pipes. No amount of water damage is worth burning your house down. After all, you can always shut off the water, but an out of control fire is considerably more dangerous and destructive. During the bitter cold this winter, remember to take measures to keep the vital components of your home safe, but do so with caution. Taking care when using heat sources is as important to safety as staying out of the cold.