Skip to content
Previous Next
What Federal Relief is Available After a Disaster? 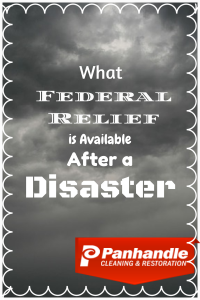 What Federal Relief is Available After a Disaster?

It can be difficult to know just how to recover after a large scale disaster has hit your community. Fortunately, federal organizations have been put into place to assist with these types of situations. Take a look at the federal relief groups that have been put into place. In addition to these, there are other organizations out there that work to help in times of disaster.

The Federal Emergency Management Agency is part of the United States Department of Homeland Security. It was originally constructed on April 1, 1979, and since then has been put to use aiding those in need during crises. The main goal of this organization is to coordinate the disaster response to an event that has happened within the United States.

FEMA will respond when the local and state entities where the disaster occurred claims that they are not able to get the situation under control without federal help. A state of emergency must be declared before action can be taken.

In addition to providing relief during the disaster, FEMA also provides resources before the disaster strikes, giving residents the opportunity to learn and prepare for the worst. This preparation will make a big difference in surviving a large disaster.

While the main focus of the Red Cross is to offer disaster relief within the nation, there are other services that have been added, each helping to improve the living conditions of those in the area. This includes helping the needy, delivering communications services, and helping to comfort and assist those in the military along with their family members.

With all this in calmer times, the main purpose of the Red Cross is still to deliver assistance to those who have suffered because of a natural disaster. Every year the American Red Cross responds to over 70,000 disasters. These disasters are both man-made and natural. While this organization is not technically a government entity, it was granted a congressional charter, giving it obligations to the United States.

When local help is not nearly enough, there are larger entities supported by the federal government that are designed to help. These are advantageous to everyone in the face of disaster. Along with other private groups, FEMA and the Red Cross work to bring relief to those who need it most.