Skip to content
Previous Next
JMHS Recovers From Water Break

John Marshall High School officials and the Marshall County Board of Education were assured Thursday that flood damage at JMHS will be repaired in time for the first day of school.

Robert Contraguerro Sr., Panhandle Cleaning and Restoration president, said his employees have been working at the school since July 24, when a washer hose in the nurse’s room ruptured and water flowed for several hours on two floors in the building’s north end.

“The work will be complete, and it will be safe for the students and staff to return to school on schedule,” Contraguerro said.

The first day for students to report is Aug. 26.

Contraguerro, who estimated that 20,000 square feet of space was affected by the flooding, informed school Superintendent Fred Renzella, Principal Thomas Wood and maintenance Supervisor Kenny Rhodes of the timetable for completing the work, which will involve working this weekend.

Water found its way to several classrooms, the school’s office complex and the North Commons, damaging those areas in different ways. In addition to flooring, walls and ceilings, equipment such as computers was damaged.

Heavy damage occurred in the media classroom-broadcast studio, including damage to equipment that had been in use for just a year. Most of the furnishings in the room were custom made.

The origin of the problem was on the main floor; however, water made its way to the lower level through the floor and also down a stairwell just outside the school’s kitchen.

Although water made its way through the kitchen, little damage occurred there since most stainless steel items were high enough off the floor to avoid becoming wet.

On the lower level, the classrooms and labs that water entered had tile flooring that had to be removed.

The glue to keep the tile in place has an asbestos adhesive, making it necessary to remove all the floor tile in these rooms.

Contraguerro said these rooms have been cleared of any asbestos and that new tile will be installed this weekend.

The carpet on floors in the office complex had to be removed, and new carpet has been ordered.

Since the walls of damaged rooms and the office complex are made of wallboard, it has been necessary to replace the lower part of the walls 2 feet from the floor. Once this portion of wallboard was removed, giant dehumidifiers were utilized to thoroughly dry the area and eliminate mildew.

Once all the new wallboard is in place, these areas will be painted.

Contraguerro said his firm has had great cooperation from other companies and agencies that either are doing some of the work or are responsible for inspecting the work.

Wood and Renzella both congratulated Contraguerro for his firm’s work. It was noted maintenance personnel and the school’s custodial staff helped by removing equipment from the damaged rooms and the office complex. 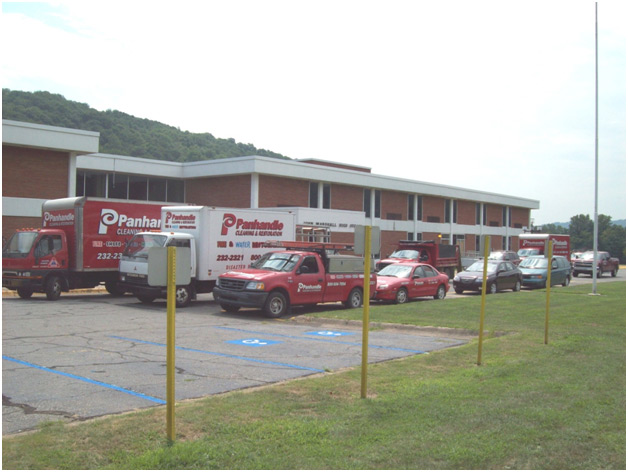